Camping and canoeing on the Black River

My name is Kevin, and I’m an outdoor enthusiast, teacher and battlefield guide from Belgium, writing about my outdoor life and camping adventures for Campspace. 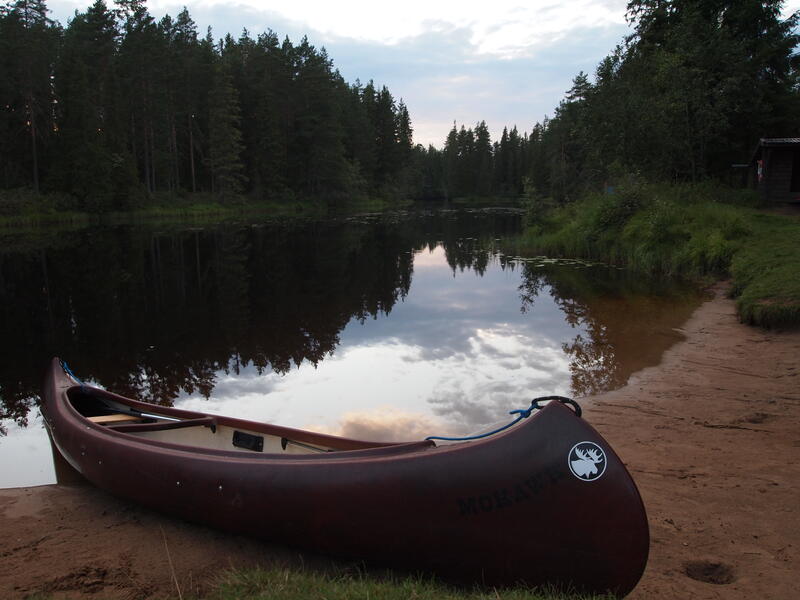 Camping and canoeing, that seems a perfect marriage, doesn't it? My name is Kevin, and I’m an outdoor enthusiast, teacher and battlefield guide from Belgium, writing about my outdoor life and camping adventures for Campspace. For my wife and I, our canoe trip in Sweden was the culmination of one and a half years of mini-marriage trips in the summer of 2011. And it was an experience we definitely want to repeat, together with the children this time.

I had never done canoeing before, but I had done camping. When I was 9 years old, I joined the local Chiro, the largest Flemish youth movement. It changed my life. I had a great time, made lifelong friends and as a leader, I learned how to run a mini society. And the annual summer camp was a hit from the very first time: living outside together, going on hikes and sleeping in tents! It still warms me up.

When I met my wife, we also went camping in summer. Even on our last big trip without children – yes we made several smaller honeymoon trips - the tent was in our car. It was a very diverse trip: we made a city trip to green Hamburg, breathed in the historic air of the old Hanseatic city of Lübeck and enjoyed the musical Göteborg. But the big goal of the trip was the five-day canoeing trip in Värmland, Sweden.

In my first contact with Klarälvdalen Kanot, I talked about kayaking all the time, because I had done that several times before, and I did not realise that canoeing might be something else. But it definitely is: when canoeing you kneel and use a single-bladed paddle. In a kayak you are seated and use a double-bladed paddle to name but two differences.  So we were absolute beginners when we started. We were beginners in other areas too, as day three of the trip would prove...

Colin, the owner of the campsite in Ekshärad where we had pitched our big tent, took us to the starting point on the Klarälven river an hour further away. He explained the basic techniques of canoeing, showed us the designated route on the maps and assured us again that the water of the river was drinkable. Klarälven does not mean "the clear river" for nothing. With our heads full of courageous and adventurous dreams, we started our trip. 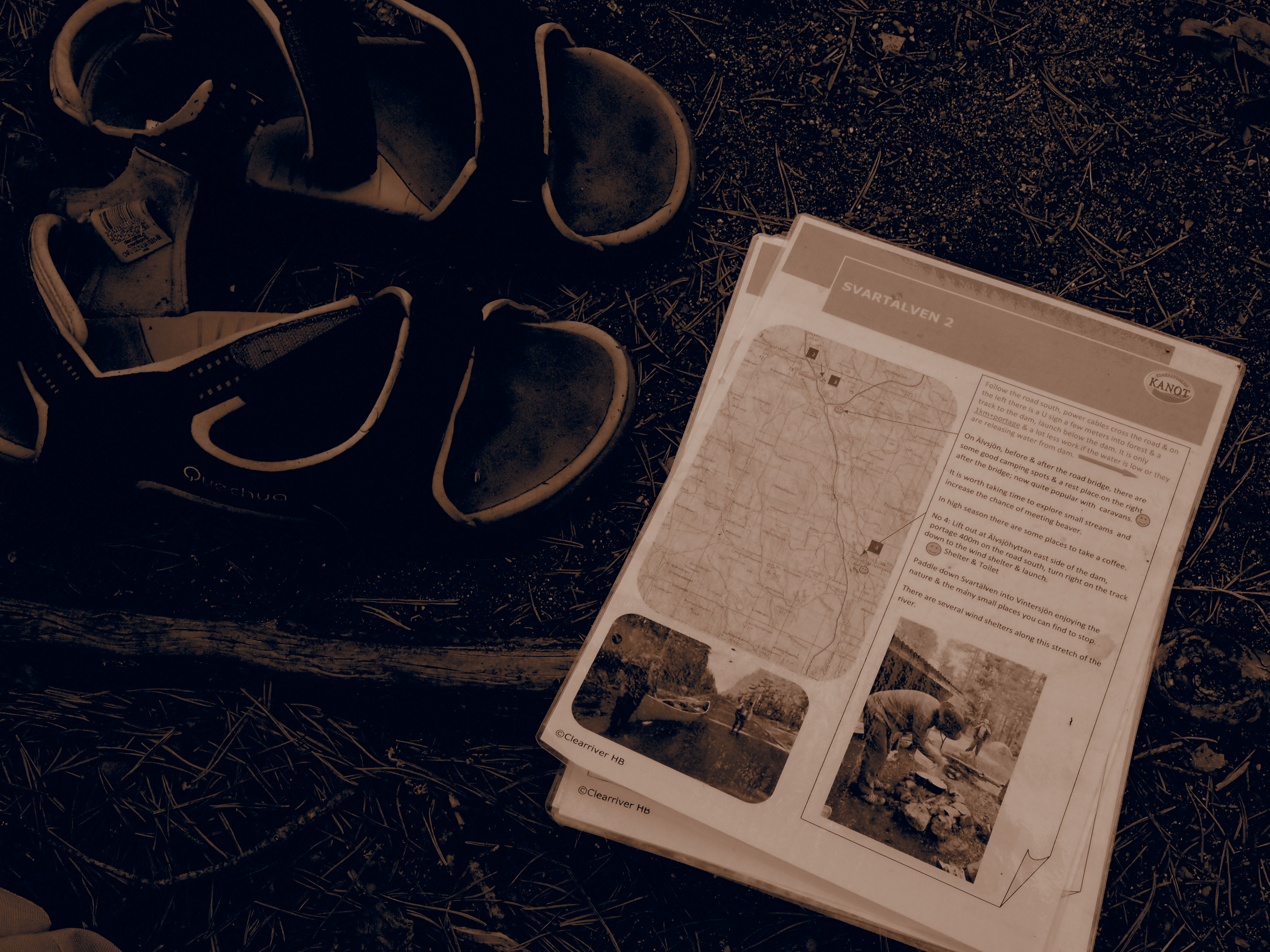 It was wonderful! The rhythmic lapping of the water, the sounds of the almost deserted forests around us and the singing of the birds calmed us down. After the fast paced kilometres through Belgium, Germany and Sweden, moving slowly through the water was a welcome break. The slowness made the forest and the river, in short nature, even grander. 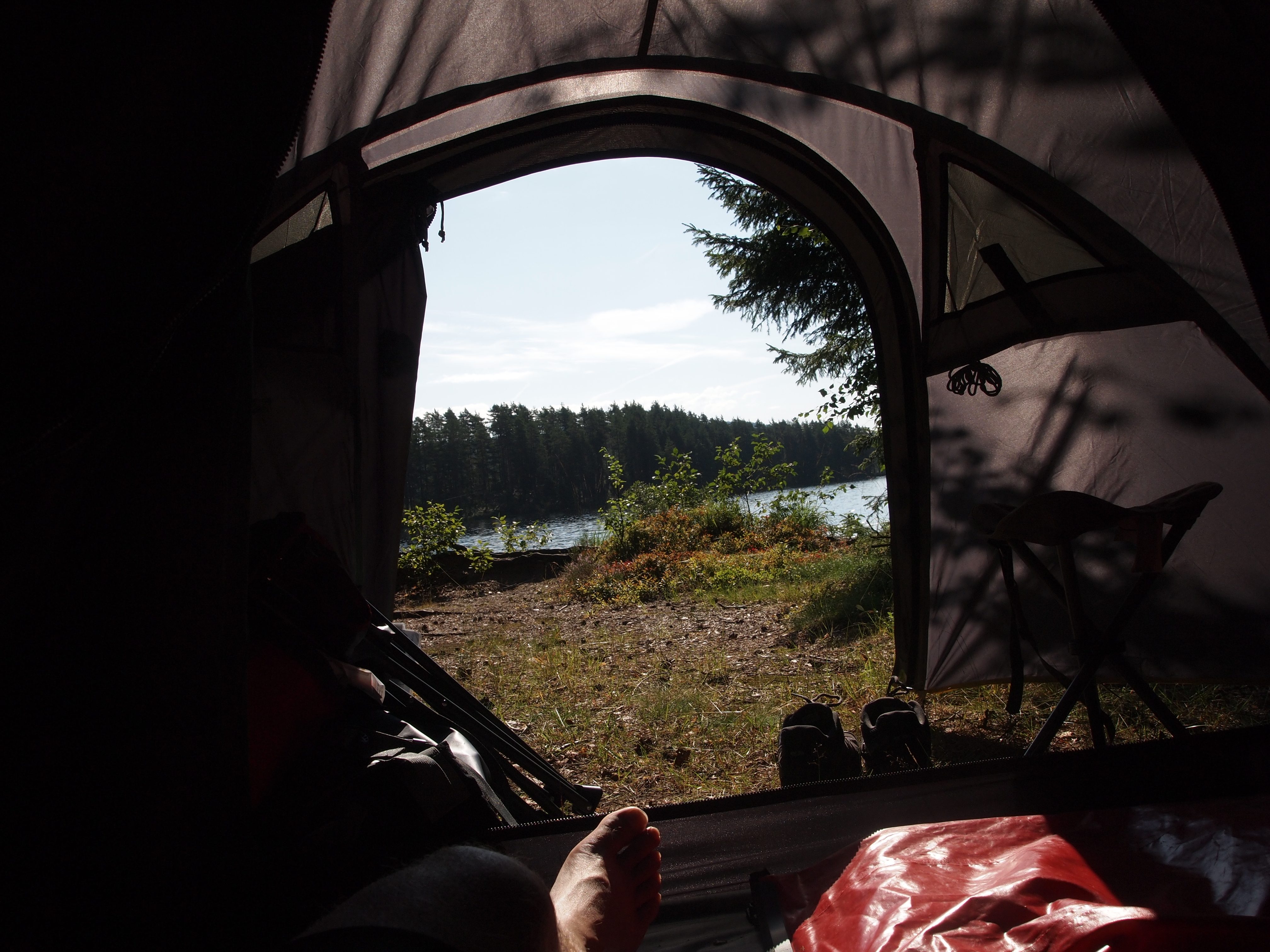 In the evening, we could pitch our tents wherever we liked because in Sweden, just like in Norway and Finland, there is the allemannsretten. This customary law allows anyone to camp for the night on private land as long as you respect a few basic rules, such as respect for nature and the inhabitants. However, it is not possible to moor up everywhere, so we always camped in designated areas with toilets and often a fixed fire place with barbecue grill. We were always alone there and enjoyed the cosy evenings before we crawled into our three-man tent. Three people, yes, because we wanted some space and luxury. However... 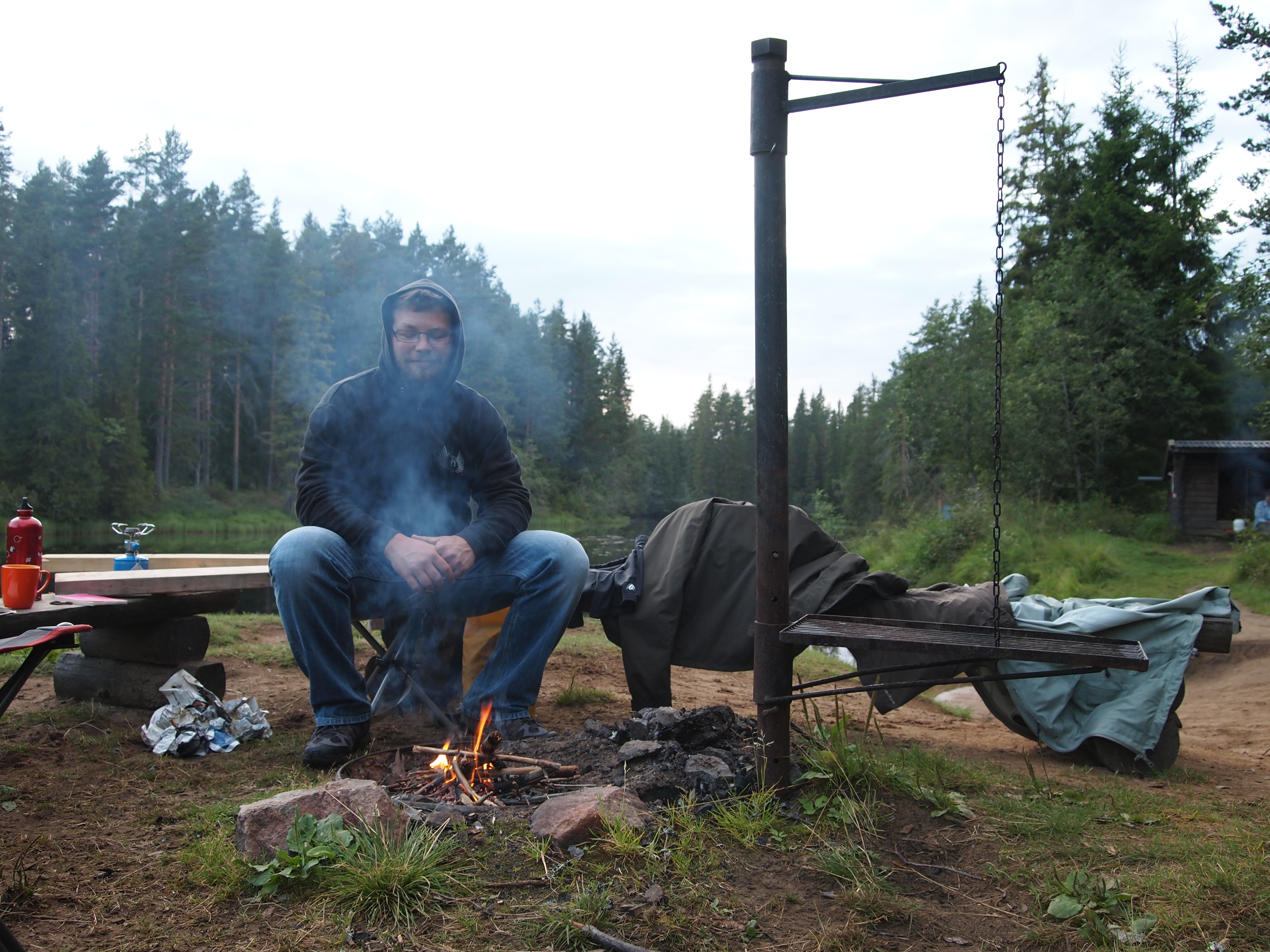 The third day was more challenging than the previous one. The weather was less summery than the days before and so there were more waves on the lake that we had to cross. The fear of capsizing sunk this inexperienced canoeist to a low point, although in retrospect I have to admit that this was an exaggerated emotion. And then it turned out that the bottom of the island on which we were moored was not really suitable for camping. Moreover, we were gradually running out of food, drink and gas. There were two reasons for this.

Two lessons I learned while canoeing

Firstly, I had conceived the canoe trip as a kind of survival adventure in which we would survive as primitively as possible in the "wilderness". I had therefore packed as light as possible and calculated our food supply a little tight: I had not taken into account any snacks and only four crackers per person for breakfast every day is not much anyway, let alone when you have to go canoeing for another day.

Secondly, we had crossed from Klarälven to Svartälven, the "black river". 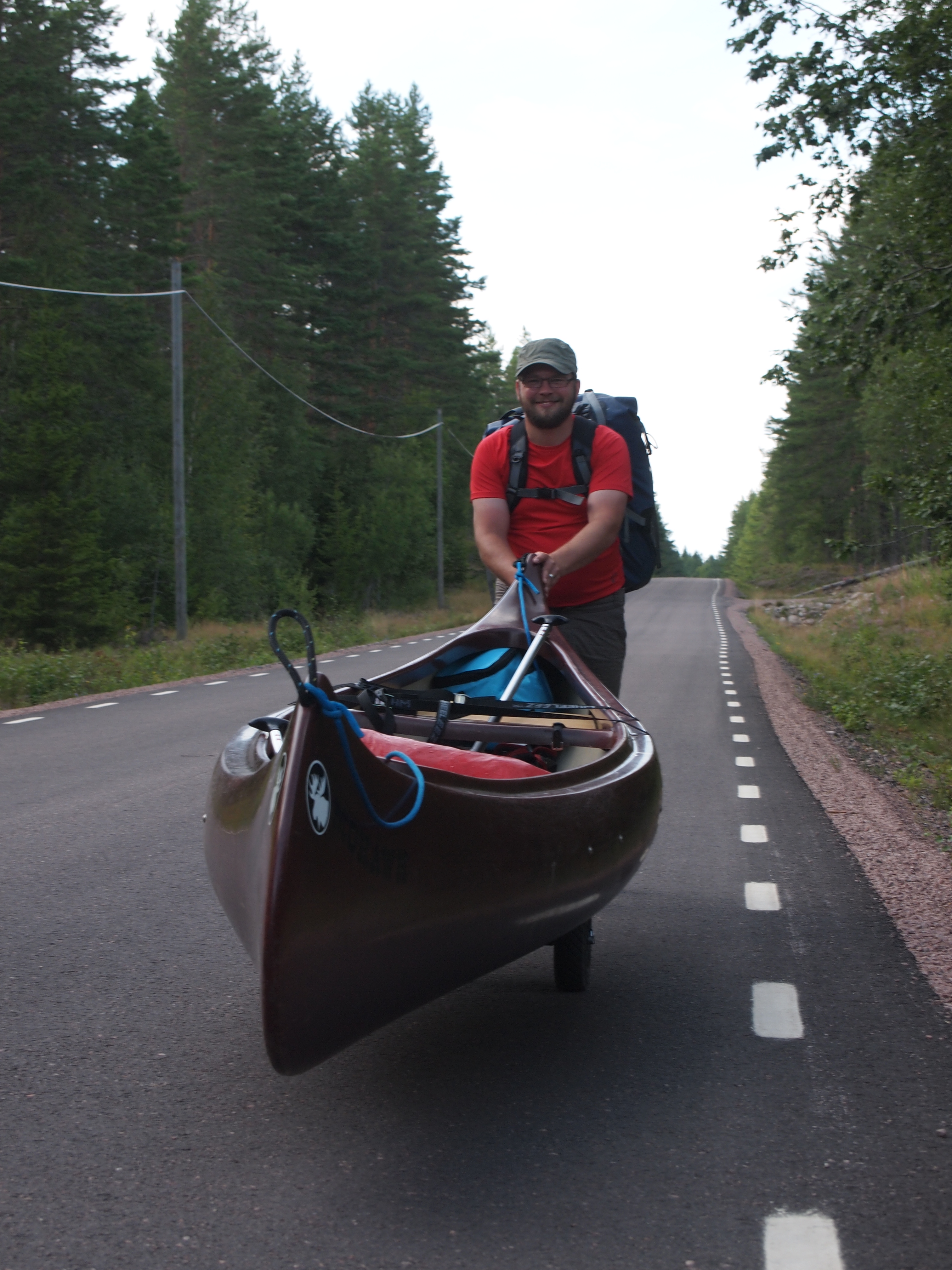 The water did indeed look much darker and despite the name, the water was drinkable, but it did not taste good at all. Especially for my wife, who was pregnant with our son at the time, the water was undrinkable. So we made tea of it, but that meant that the small gas cartridge was running out too quickly. My single-minded focus on weight when packing began to take its toll.

Our saviour and camping host

And then there was this woman in the bushes... While looking for a good camping spot, I was suddenly addressed in English by a woman who was picking berries. I jumped up because I had not seen her there. I told her about our canoe trip and our search for a suitable place for our tent, because "we were three, if you know what I mean". The woman promptly invited us to pitch our tent in the garden of their cottage. When we got to know each other a little better, it turned out that our hosts were from the Netherlands. So we could continue our conversation in our mother tongue! And then they also invited us to their table. Our little supply crisis was solved immediately. I have forgotten what we were served, but I do remember that the glass of red wine tasted very good to me!

The next few days went by without too many problems and on the fifth day we arrived at our destination just in time. We didn't really need to be there, as Colin had told us to go at our own pace and if we had been ten kilometres before the finishing line, he would have come and picked us up there. I guess that we were not yet ready to live fully to the rhythm of the wind and sun.

Since that summer, we have continued to dream of canoeing in Sweden again, as we have been bitten by travelling on the water, camping on river banks and living in nature. But next time, we will take our children with us and I will not skimp on our food supplies. You can take enough in a canoe anyway.

I have learned much more about living outdoors since then, so if you are curious about more recent outdoor adventures, follow me on Instagram. Or you could join me on a battlefield tour.

See you out outdoors!